Focus on a player : Hervé Laviale 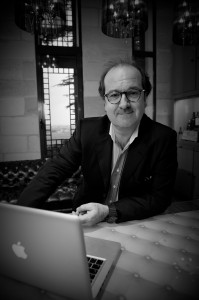 This was a highly successful vintage, as was 2000, the year the couple became the new owners of another estate, Château de Lussac (30 hectares in the Lussac-Saint-Emilion appellation).

In 2004, the Laviales took over Château Vieux Maillet in Pomerol.

And to think that before 2000, neither of them drank a drop of wine!

Château FRANC MAYNE : a heritage to be nurtured

Château Franc Mayne’s vineyard is made up of 7 hectares of Merlot (90%) and Cabernet Franc (10%), in one single unit around the château, located on the limestone plateau of SAINT EMILION and the Côte de FRANC. 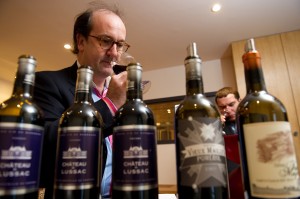 The estate belonged to Jean Theillasoubre until 1984, when it was bought by the Axa insurance company. In 1996, it came under the ownership of Georgy Fourcroy, a Belgian wine merchant, and his associates.

Hervé Laviale et Griet Laviale – Van Malderen have carried out major transformations since their arrival : the complete renovation of the vat room, which now has new wooden and stainless-steel vats filled via gravity, the building of a new first year barrel cellar and the opening of bed & breakfast guest rooms.

The vines are planted on mainly clay-limestone soil. Hidden underneath the highest part of the vineyard are two hectares of underground galleries – old quarries used for stone extraction – part of which is used as a second year cellar.

The premium wine of Franc Mayne is a blend of 90% Merlot and 10% Cabernet Franc. The estate’s second label, Les Cèdres de FRANC MAYNE is pure Merlot. 24,000 bottles of the premium estate wine are produced on average every year, and 5 – 6,000 bottles of the second wine, which takes its name from the two ancient cedar trees planted at the entrance to Château Franc Mayne.
A new plot of Merlot has just been replanted with a higher planting density than local standards: 7 – 7,500 vines/hectare.

Château FRANC MAYNE’s premium wine has recently been presented at the Futures tasting of the Union of Bordeaux Grands Crus, of which it is a member, besides being also part of the Association of Classified Growths of Saint-Emilion. 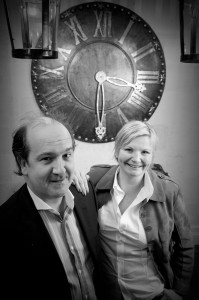 Wine tourism and the Relais de FRANC MAYNE : a surviving tradition
The Relais de Franc Mayne is a magical place, with its 360° view over the landscapes of Saint-Emilion, Pomerol, Fronsac and even Bordeaux.

The châteaux guest rooms are an invitation to embark on a voyage of discovery – every one of them is its own separate universe: British Landscape, Indian Fusion, Campagne Française, Asian Mood, Pop Art Room, African Lodge, Black & White, Stella di Mare and Out of Africa.

Another novelty will be a discovery walk through the underground quarries, where visitors will enjoy a sensory ‘Jules Verne’ style presentation of the importance of the ‘terroir’ of Saint-Emilion’s plateau, the art of stone-cutting and the great historical figures of Saint-Emilion. These ancient stone quarries already attract between 8,000 and 10,000 visitors every year. This limestone plateau is where the secrets and the heart of Saint-Emilion’s fine wines reveal themselves.