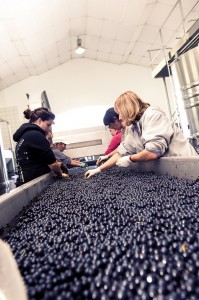 Quality in evidence for Château Brown, but no wild celebrations for the 2011 vintage
Since Monday 3 October, the harvesting was completed at Château Brown, in Pessac-Leognan appellation.
“The quality of this vintage will be won and lost on the home straight”, notes Jean-Christophe Mau, “and those who were willing and able to wait will end up making good wines.”

The Indian summer with its above-normal sunshine and temperatures allowed the Brown technical team to start picking the cabernet-sauvignons the last week of september. These grapes were beginning to show very promising ripeness. For this 2011 vintage, the crux of the issue has been getting the grapes to ideal ripeness by means of optimum vine preparation: thinning, green harvesting, etc.…

7th october saw the traditional harvesters’ lunch to close the busy grape-picking season, but it was also an opportunity to take stock:
•    In terms of yields, we have 31 hectolitres/ha for the whites (36% down on 2010) and 34 hectolitres/ha for the reds (-30%), hence much lower levels than last year’s harvest
•    The quality of the cabernets is better than that of the merlots, on our gravel soils
•    The main characteristics of the 2011 are as follows: intense colour, high, alcohol level a little more traditional and Bordeaux in style, between 12.5 and 13°

At Château Brown we handle the grapes with great care; the sorting operation is important and took on full meaning this year: 6 people were employed for the second sorting of the bunches (see photo), then the grapes, one by one… Painstaking work.

For Château Brown, as for others, “it has been the summer of all excess,” notes Jean-Christophe Mau. The healthy condition of the vineyards ended up being decisive in triggering the harvesting dates, with each winegrower taking the plunge according to the quality of the work done beforehand in the vines. This upstream work should be the key to success for 2011.