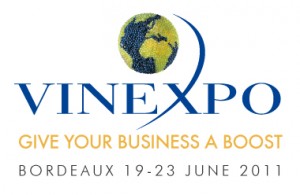 Half the world’s total production continues to come from three major producers: France, Italy and Spain.
China first entered the top ten producing countries worldwide in 2007 and by 2010 had moved to 7th place. Its production is expected to increase the most, up 77% between 2010 and 2014.

Wine consumption worldwide continues to grow
The total world consumption of grape-based wine reached 31.51 billion bottles, up 4.5% compared to 2005.
This growth had slowed down significantly over the three previous years. Between 2009 and 2014, the VINEXPO study forecasts a moderate increase in world wine consumption of 3.18 %.

Light wines take the Lion’s share
In 2009, still light wines accounted for 92.6% of all wine consumed across the world.

Worldwide growth in consumption is driven by three countries: the U.S., China and Russia
Nearly three quarters of this growth will come from three markets: the U.S., up 26.94 million cases, China, up 20.76 million cases, and Russia, where 5.53 million more cases are expected to be consumed.
The U.S. will become the world’s leading wine market in 2012
Light wine consumption is expected to  decrease by 0.82% in the same period in Italy and  by 4.06% in France.

Rosé wines have wind in their sails
Although the overall share of rosé wine consumption only represents 9.9%, its growth will be the strongest between 2009 and 2014 and is expected to reach 7.76%.

Growth of the sparkling wine
Sparkling wines accounted for 7.4% of all wines drunk worldwide but their consumption is expected to grow by 5.61% between now and 2014.

Worldwide wine sales turnover increases twice as fast as volume consumption
Total wine sales turnover* expressed in terms of consumer prices  up 9.25% compared to 2005, while over the same period, the volumes of still light wines consumed grew by 4.2%.
Between 2010 and 2014, sales figures are expected to follow this growth trend.
* Retail sales inclusive of tax. The VINEXPO study is the only one to estimate the world sales turnover of still wines containing less than 15° alcohol by volume and sparkling wines. The information provided is based on a constant US dollar value and average exchange rates for the other world currencies in 2009 (e.g. US$1 = €0.719).

From Vinexpo
Founded in 1971, the database of The iwsr has the widest scope and is the most accurate and most detailed source of information within the world market of alcoholic beverages.