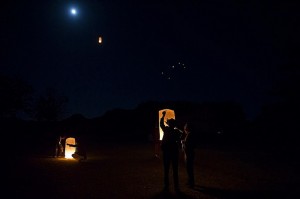 Château Guiraud welcomed over 100 people to celebrate the 1st Fête de la Lune on Monday, the 12th of September 2011. The Moon Festival is the second most important celebration in many Asian countries after Chinese New Year

By honouring the earth’s satellite, Château Guiraud wished to show their attachment to nature and the importance they place on viticulture. The growth cycle of the vine determines all that is done in the vineyard, up to and including the harvest. The moon is a symbol of the estate’s intimate relationship with nature. This closeness is essential to produce great wines at Château Guiraud, where grape growing is certifiably organic.

The weather was fortunately cooperative and conditions were ideal to observe the moon, which contributed to making this a poetic and refined moment not be forgotten.

Château Guiraud will organize the second Moon Festival, due to take place on Sunday, the 30th of September 2012…

In order to make this celebration a success, a series of surprises was planned…